NOTTINGHAM, UNITED KINGDOM. The fast-paced Scottish startup GoRoadie has taken a slip road off the M1 and pulled into Nottingham.

Founded in 2018, by developers Michael Carr and Barry White, the Dundee-based company helps driving students search, compare and book a driving instructor who suits them. It also houses tools which allow instructors to easily manage their students, holding necessary contact details in one place.

Barry White, co-founder of GoRoadie, said: “Launching in Nottingham is a significant milestone for us. This is our first foray into a large English city and the response has been extremely positive. Instructors have been jumping on the platform with a high level of enthusiasm - it's our fastest grown city since we launched.

“Our model has already proven to be successful in three of Scotland’s cities. The number of bookings and instructors is now increasing month on month.“

“This launch is inline with our national growth plan with our ultimate goal being job creation. In the next 12 months we aim to recruit five employees, while continuing to support instructors who work for national franchises become independent. Our ambition is to be synonymous with driving lessons, such that Airbnb is with flat shares.“

Commenting on the platform, newly signed-up driving instructor Waseem Haider of Smartpass Driving School, said: “Having used other apps before, I can honestly say that GoRoadie really stands out as it really catered for both instructors and students. As technology is evolving to make things easier as demonstrated by GoRoadie - it's very easy to use and that's coming from me, someone not tech savvy. I am pleased I have already received prospective learners, with whom I can pass on my skills ensuring that they come safe and responsible drivers for life."

Early this year, GoRoadie was announced as SME100's Most Innovative Solution for Locating Driving Instructors. The company also secured the Commended Side Hustle of the Year Award at the UK Startups Awards in London last year. 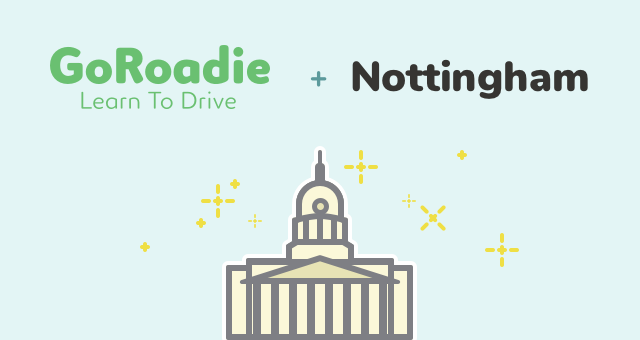 Learners can book online at anytime from www.goroadie.com/search/nottingham.

Are you a driving instructor?

GoRoadie has no hidden charges and your first referral is totally free. Take us for a spin!

Have questions? Drop us an email with anything that's on your mind.

GoRoadie Drives Forward with Investment Round

Our response to driving instructors about Covid-19

Tech Nation names GoRoadie one of the top startups in Scotland.

GoRoadie wins commended "Side Hustle of the Year" award in London.

We have passed the 500 booking request milestone in Dundee.

Donation to Cash for Kids