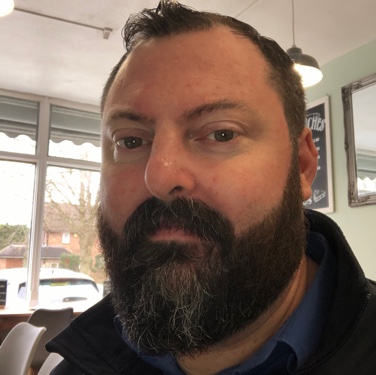 Thanks for joining us today Chris. How are you getting on and how are you keeping safe right now?

It's a bit tedious isn't it? You get up in the morning and think: "What am I going to do today?". I've got two kids to keep me entertained and we've rediscovered the frisbee — so that's a daily occurrence now with my three year old!

I'm trying to get a bit of work down every now and again, but it's hard to find the motivation. I think all instructors have had the things they've planned to do for ages and never had time, now we have all the time, but don't have the motivation!

Trying to get a few bits done and keep in touch with people. I started Facebook page for driving instructor information, to put that information out there for people, so I've had quite a few get in touch asking for more information, so I've been doing a lot of that. That's keeping me busy.

Regarding your business, how has coronavirus effected it?

Everything has ground to a halt. We haven't got any key workers that are being taught, so myself and the instructors that work with me, we've shut the doors. My business partner does speed-awareness work, so he's still doing some bits on that side.

Outside of that, none of us are working and we're just waiting to see what comes next. The biggest challenge is going to be: "When is the end?". Just because they say we can go outside doesn't mean that we want to be teaching people one-to-one in a car environment.

“ Everyone needs to make their own choices and it's great to talk to other people about it, but don't judge.

How are you being supported by the government at this point?

Universal Credit. I was luck, I got in a couple of days before a lot of people, so I didn't have the 50,000 people queues. I've been speaking with a lot of instructors that are struggling to get through. The Universal Credit system should be coming out at the end of this month (April), then we're all waiting on the self-employed figure to come through from HMRC – they're saying June for that one.

One nice thing, since we're not going outside as often, so we're not spending as much money. I was lucky, I'm just about to make my final payment to my car lease, so I'll be a driving instructor without a car for a little bit.

I've had phone calls coming in of people saying "Are you still doing lessons? Can we do lessons?" and they've said they'll wait for me, A promise of work on the other end. All my pupils have been put on pause and they've been brilliant about it, however there's a few of them still confused why we can't go out.

How do you feel the guidance from the DVSA has been and where do you think it can improve?

They've been very good at saying what examiners need to do. It was a case of stopping tests because it wasn't deemed safe for examiners to proceed.

For instructors, they've answered a few questions of how we interact with them, but there hasn't been guidance, they've waited for the associations to put that out. It would have been nice to have a public face, which is why I set up a Facebook page to say, the information we are getting, let's put it out there, so people know where they can go and find it.

The government aren't saying as a driving instructor you can do this or can't do this. They're saying no you can't unless it's with a key worker. That's a very grey area for someone who needs money coming in, and we know instructors are very hand-to-mouth, the way things work, that's the industry we're in.

What advice do you have for ADIs?

I don't think there's a right or a wrong at the moment. I think everyone needs to make their own choices and it's great to talk to other people about it, but don't judge them. Share your reasonings, share the information that you have, but don't judge, everybody's in a different situation.

I've been supporting some instructors who've been going out trying to find driving jobs. We've managed to get two or three of the big insurance brokers to allow driving instructors to do delivery service using their current insurance.

Everybody's got their own choices to make and it's important we allow that.

The other thing is, don't share fake news. There's so much of it and it's really hard to tell. So, question everything and do your home work before you share it. Do share the teddy bears and rainbows in the windows.

Specifically, from an ADI perspective, stay in touch with your pupils. You want a business to go back to, so drop them a message just to say we're waiting on information.

We're also good at taking information in and relaying it to other people. If we can keep that going. We're actually quite strong as a community, so let's take that as an opportunity to step up and positively fight back. We can't do that yet, but we can start making plans.

Well said, Chris. Thanks very much. It's been great chatting with you. Hopefully we get to do this again in the future. Stay safe.

Thank you for the opportunity. Good to talk with you.

New pupils when you need them

Listing your driving school on GoRoadie is completely free and only £18 per pupil when you choose to accept them.

Set your availability during busy or quiet periods and stay in full control of your prices or discounts.