Warning signs indicate to the road user what they cannot do. These signs typically use circle or triangle shapes, as opposed to rectangles that are used to provide information. 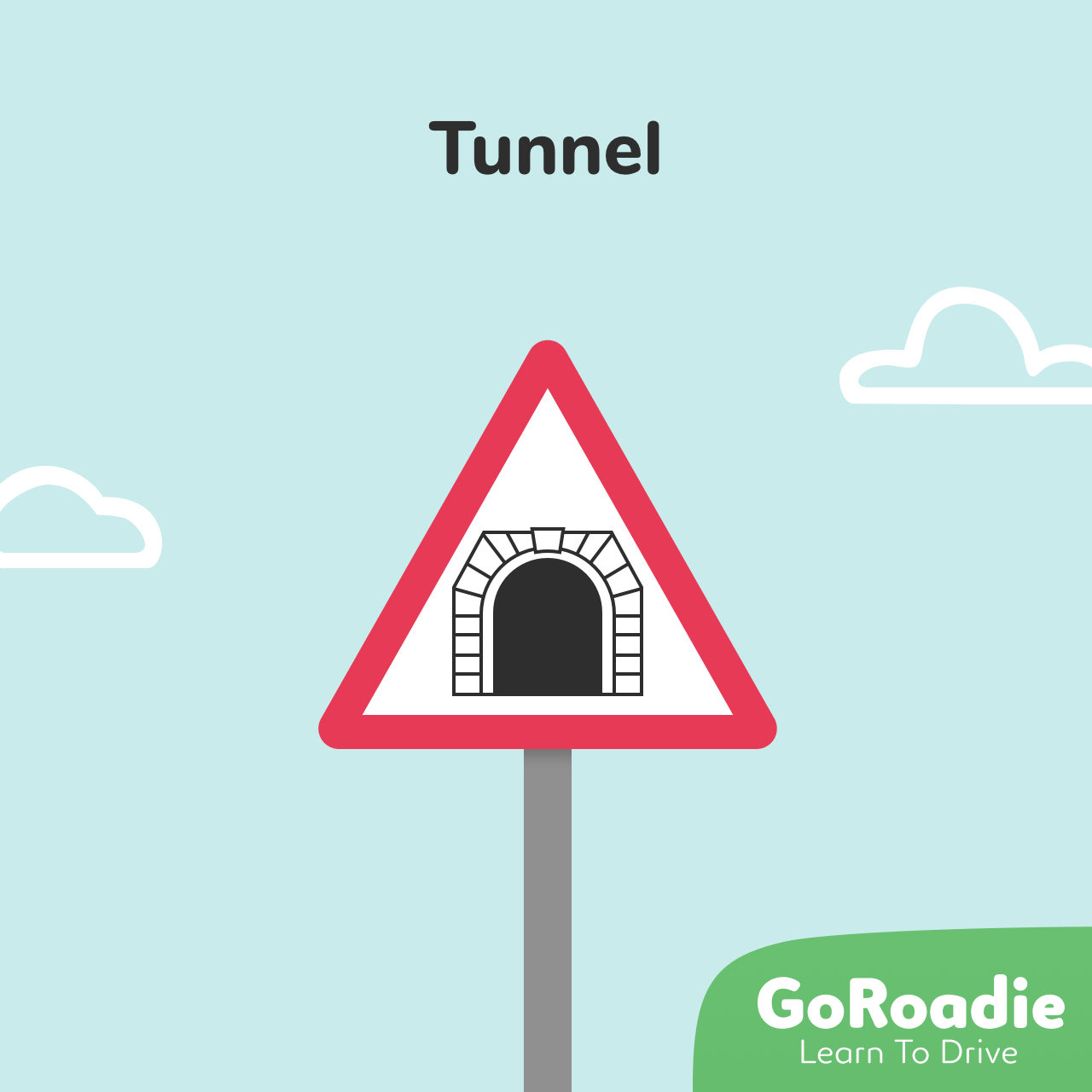 This alerts you to be aware of multiple things, including: 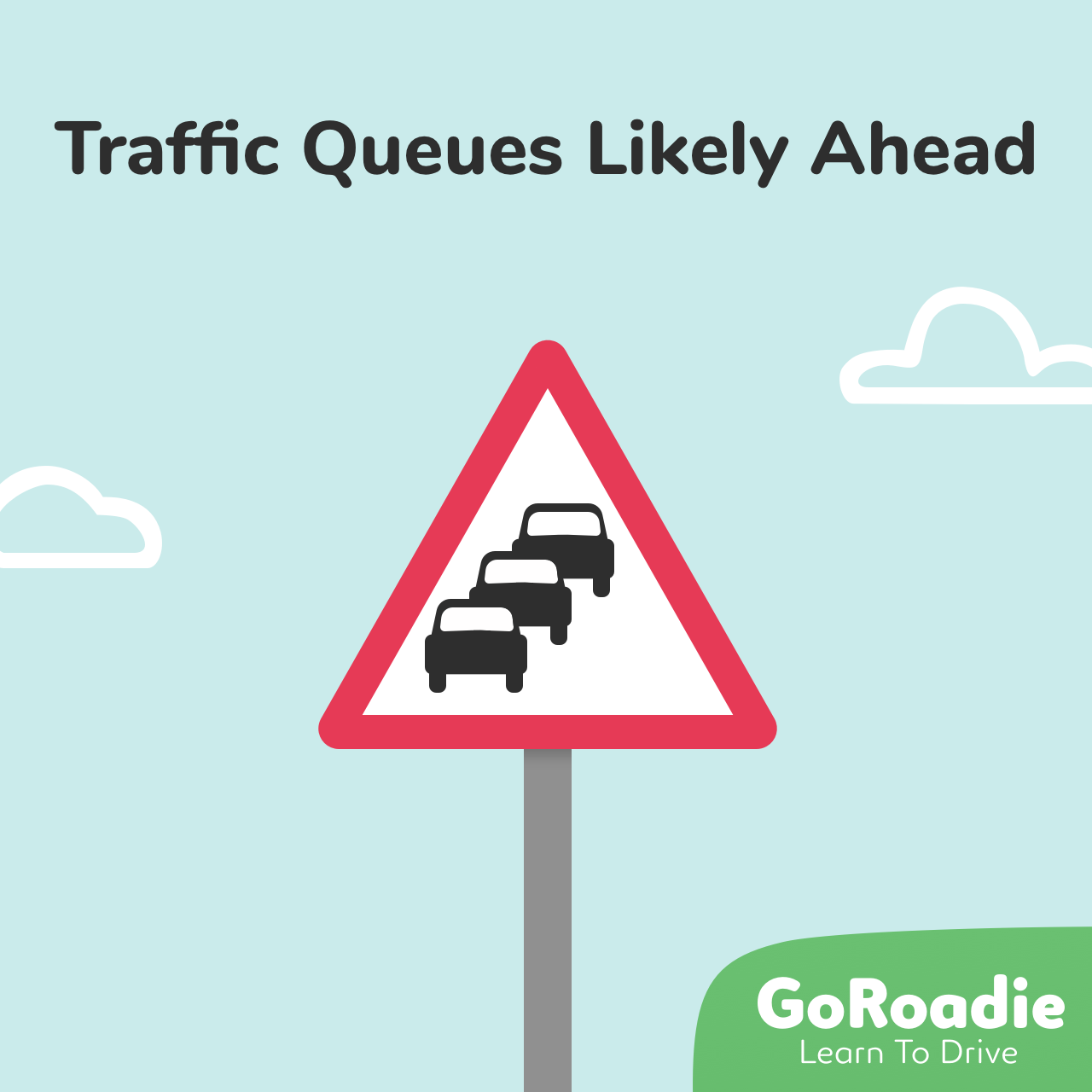 The traffic queues likely ahead sign is usually placed before busy junctions to warn drivers that it's common for traffic to build up in these areeas.

You should expect queues to build up during rush hour traffic, when people are driving to and from work.

If you know you'll be driving at peak times in busy areas, plan ahead so you factor in enough time for being delayed by the queues, or consider an alternative route. 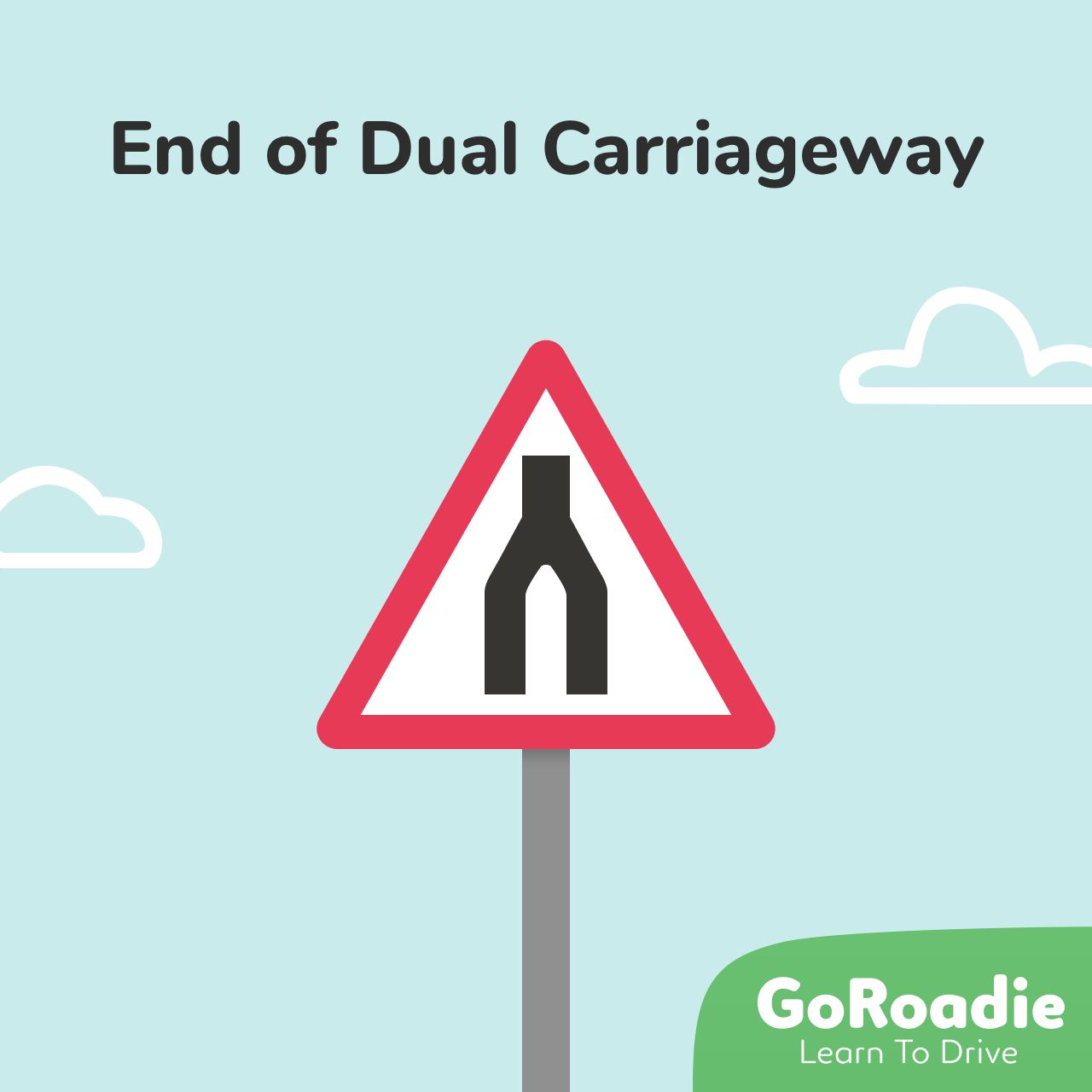 Where you'll see these signs, it's also common for the outside lane to have curved arrows painted on them, indicating that you need to merge into the left-hand lane.

This sign is very similar in design to the road narrows on both sides sign. The differences are that this uses thicker lines and the 2 lanes join at the top.

The road hump, commonly referred to as a speed bump is a rounded or flat topped protrusion that covers part or full width of a road, or at a junction.

The road hump is a safety feature, intended to slow down traffic. If you've ever driven over one at speed, you'll definitely have felt a hard jolt, which isn't healthy for your cars suspension.

When the hump only covers part of the road lane, that is for the purpose of allowing buses and emergency vehicles with wide wheelbases to pass over them. You don't want to be in a double-decker that's clambering over one of these!

You will see this warning sign in areas where the speed limit is over 20 mph.

The hump bridge sign warns the road user to expect this type of bridge ahead. There are multiple reasons to be aware of a bridge ahead:

Side winds or sometimes referred to as "crosswinds" signs indicate to the road user that the area they are about to travel through is at risk of strong winds hitting the side of your vehicle.

The effect of this is that you may find your vehicle getting pushed towards the edge of your lane, either towards another lane or the side of the road. The effect will be felt more strongly by cyclists, motorcyclists and high-sided vehicles.

When you see the sign, ensure you're going a comfortable speed and both hands are on the steering wheel, as you may need to correct your position in the road against the direction the wind is blowing.

This indicates that the road changes to a steeper incline ahead. In the case of the example above, the incline is at 20% degrees. This number will change depending on the severity of the hill.

When meeting a steep hill upwards you should:

Road Narrows On Both Sides

The road narrows on both sides sign indicates that you'll have less space either side of you for manoeuvring in your lane.

What this means in practical terms is that you should be prepared to be driving closer to other road users and embankments, so you should ensure you're travelling at a speed that gives you high control over the vehicle.

You might see this used along side a hump bridge sign, where it's common for modern roads to flow in to older, small bridges, where the road can't be made wider.

This sign is very similar in design to the end of dual carriageway sign. The differences are that this uses thiner lines and the 2 lanes never touch, only get closer. It's easy to see how, at a distance, these signs could look nearly identical, so if you see either of these, it's worth double-checking.

The double bend sign warns the road user that there is a bend in the road after the bend you can likely already see ahead of you.

The second bend may well be hidden to the road users, so it's important to warn of what to expect. The first may look quite light, allowing drivers to flow around it, but by warning of another bend straight after, it allows time to slow down and be aware.

A slippery road means your vehicle will have less traction and therefor less control on the surface ahead, meaning braking effectiveness will likely be reduced.

Turning the wheel may become easier than normal, so be careful of overcompensating your steering and adjust accordingly.

Drivers should increase the distance between themselves and the vehicle in front, much like you would do when driving in rain or snow.

Uneven roads signs can be used to warn of various different road conditions. Typically, you'll see these signs on older roads and where perhaps it travels through country backroads.

Uneven roads mean the camber of the road is varied and you should expect reduced control over vehicle handling. On these roads, be wary of incoming traffic, reduce your speed and ensure both hands are on the steering wheel.

The uneven road sign looks quite similar to both the road hump and hump bridge warning signs at a distance, so give them a good look when getting closer to the sign.

Stop or Give Way Ahead

This unusually vague (and upside down) sign is usually displayed a plate underneath show the words "GIVE WAY" or "STOP" along with the distance to the stop or give way line.

It's common that a give way sign with have the words "Give Way" within the reverse triangle, but it is important to be able to recognise the particular shape and colours used for stop or give way, regardless of the the words, so that you are well prepared to give priority the main road ahead.

The road will have specific road markings that indicate a give way, but on lighter trafficked roads, the road sign will likely not be present.

A T-junction is where a road has 3 junctions either when the road comes to an end and requires a left or right turn, or where a side road is joining a main road.

You might look at the sign above and wonder why the "T" shape is so wonky. It's actually giving the driver information on the type of T-junction.

The broad lines show who has priority through the junction, so in this case ahead then left.

You can download a PDF version of the Know Your Traffic Signs booklet from the Department for Transport which contains explanations of the most common road signs.